Purim 2014 – Day 10, begin today to gather what you need.  Watch each day of the countdown to Purim fun!

Day 10 is today and you need to gather, find or purchase Carnival Masks.  For what is Behind the Mask that speaks Purim!

The story of Esther is like a Cinderella tale, maybe even like the current movie, Frozen.  Too bad Disney Productions never produced such a film or made for television movie.  It reflects all stories Disney animated productions.  Just imagine the music and the songs Disney is known for in their movies.  For the story you have a Hero.  That would be Esther.  You have a King, that would be King Ahasuerus, the King of Persia.  You have an older cousin to Esther, Cousin Mordecai. Older and cared for Esther, like a foster father, as her, Esther, father had died.  He was Esther’s father’s nephew.  In the story there is even a villain, that would be the Adviser to the King, and his name is Haman.

So Why The Masks For Purim?
Esther respected her Cousin Mordecai and followed his guidance for she was not to reveal herself to the King.  Reveal that she was Jewish for the King was not Jewish.   The King was searching for another Queen and noticed Esther immediately.  Her beauty was not only on the outside, but shined from within.  Kings, had many wives in ancient times.  The law for one spouse evolved later in Jewish teaching.  So, after much time as Esther lived in the King’s Palace, King Ahasuerus found himself to love her more than all the ladies.  Esther became Queen Esther.

The villain, Haman, the Adviser or also known as the Prime Minister to the King took his title to where he acted like King outside the Royal Palace.  When Cousin Mordecai refused to bow down to Haman, he, Haman, became angry.  Suddenly, disliking all the Jews that lived outside of the Royal Palace.  Are you seeing the connection to why Esther was to keep her identity hidden from the King?  How did Cousin Mordecai know to guide Esther?

There is more to the Story of Esther and I hope you will find yourself reading it.  Remember, you can find it in the Tanakh, the Writings, pg. 1457.

Stayed tuned to each day of Purim 2014 , the Countdown.  Learning about the elements that make up this holiday of fun! 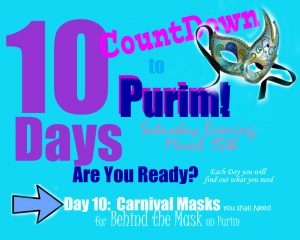