The Jewish Wedding Ketubah is the mutual agreement and the expression with two voices, the couples. 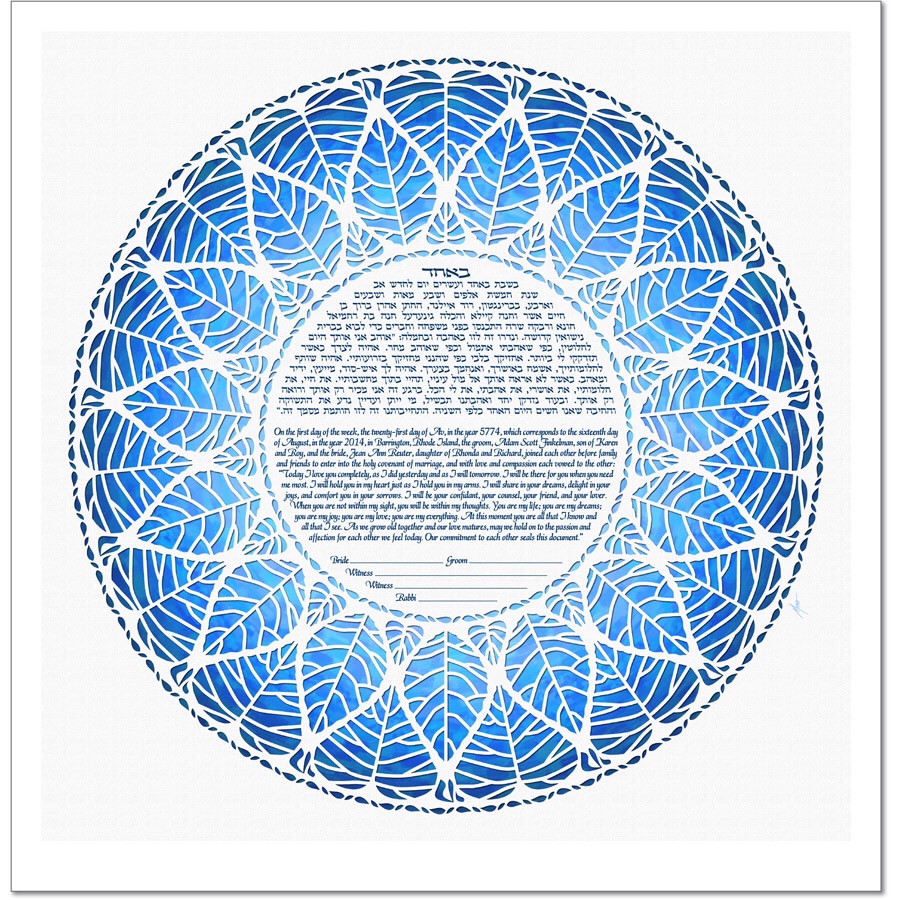 Before the Jewish people received the Torah, there was no known legislation that protected a woman’s rights. Women were treated as property and local customs in each of the lands governed this way of living.

And thus, the Ketubah took form with laws in place for marriage and if the marriage dissolves with all the protection of all women. It spelled out the financial, emotional, physical, and social obligations by the husband if he abandoned his wife. Women were no longer a piece of property.

The Ketubah is a legal document, also seen as a pre-nuptial agreement. Today, Ketubot (plural) had transformed with time, and various texts with equal voices in the written text. The Jewish artist created the Ketubah into a masterpiece like a painting. We are taught to display our Judaica in our homes.

The traditional text for a Ketubah is in Aramaic.  It is the original text when the Torah was given at Mount Sinai.

This guide will assist each couple when it is time to purchase a Ketubah for their wedding.
After making the decision on the text, the next step is the artwork by various artists.

Personalization is Available
What this means, is your Ketubah will have the important information that you provide with your wedding date, both secular and English, Hebrew names, location of the wedding ceremony, blended in with the artistically written text. All that will be needed on the day of the wedding are the all-important signatures.

The Aramaic Text Translated
The following is a translated example of the Aramaic text which is normally written in Hebrew text. On the ____ day of the week, the ____ day of the month ____ in the year ____ since the creation of the world, in the city of ____, ____ son of _____ said to this maiden ____ daughter of ____, “Be my wife according to the laws of Moses and Israel, and I will cherish, honor, support and maintain you in accordance with the custom of Jewish husbands who cherish, honor, support and maintain their wives faithfully. And I here present you with the settlement of two hundred silver zuzim, which belongs to you, according to the law of Moses and Israel, and I will also give you your food, clothing and necessities, and live with you as husband and wife according to the universal custom.” And the maiden _____ consented and became his wife. The trousseau that she brought to him from her father’s house, in silver, gold, valuables, clothing, furniture and bedclothes, all this _______, said bridegroom, accepted in the sum of one hundred silver zuzim, and _____, the bridegroom, agreed to increase this amount from his own property with the sum of one hundred silver zuzim, making in all two hundred silver zuzim.

And thus said ____, the bridegroom: “The responsibility of this marriage contract, of this trousseau, and of this additional sum, I take upon myself and my heirs after me, so that they shall be paid from the best part of my property and possessions that I have beneath the whole heaven that which I now possess or that which I may hereafter acquire. All my property, real and personal, even the shirt from my back, shall be mortgaged to secure the payment of this marriage contract, of this trousseau and the addition made to it, during my lifetime and after my death, from the present day and forever.” _____, the bridegroom, has taken upon himself the responsibility of this marriage contract, of the trousseau and of the addition made to it, according to the restrictive usages of all marriage contracts and the adjoins to them made for the daughters of Israel, according to the institutions of our sages of blessed memory. It is not to be regarded as a mere forfeiture without consideration or as a mere formula of a document.

Traditional Aramaic
This text is a prenuptial agreement between the groom and the bride wherein the husband undertakes to honor, support, and maintain his wife. In the document, he states that she will receive a certain sum of money in the event of divorce or of his death. It is a very formal contract written in Aramaic over 2000 years ago. There is no English in this text.

Traditional Aramaic with English
This text is the same Aramaic document as above. The traditional English portion is NOT a translation of the Aramaic, rather a brief paraphrase.

Lieberman Clause with English (Conservative)
This text is almost the same text as the Traditional Aramaic. A new clause was added essentially stating that in the case of a civil divorce, either the husbands or wives can appear before the conservative Bet Din (rabbinic court) to request a “Get” (a Jewish divorce document). According to Jewish law, without this document, a couple is still legally married.

Egalitarian with Hebrew and English – Reform
This text is suitable for reform and at times, conservative marriages. This is the text I highly advise couples to use, including interfaith couples choosing Judaism. The text reflects an egalitarian view of marriage and the equal roles of a couple in our contemporary Jewish society.

Interfaith
This text is designed for couples from different heritages. The language is gender neutral, so as to accommodate both faiths. It contains the specific information as to names, place, and date of the wedding, etc. and contains mutual vows of love and commitment.

Note: If you’re an interfaith couple, and you have chosen Judaism as your one faith, I highly advise you to review the Egalitarian text with Hebrew and English-Reform.

Anniversary
This text is designed for couples celebrating an anniversary from 2 years to 70 or more years. It records the bride and groom’s original wedding and does not need to be signed. Since the tradition of using an illuminated ketubah has been re-introduced into the ceremony only 10 to 15 years ago, many couples who have been married for more than 10 years never had a beautiful ketubah. They are now either deciding to purchase a ketubah for themselves in order to renew their vows, or they can receive one as a gift (often from their children).

Alternative Egalitarian (Gender Neutral)
This text is suitable for reform, humanistic, different heritages, and special partnerships. The Hebrew is a direct translation of the English. Most couples opt for the standard signature lines; Witnesses (2), Couple (2), and Rabbi (1).