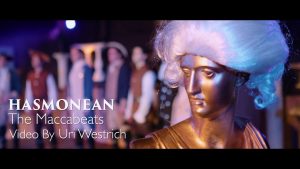 Hamilton –  the Music, the melody is the backdrop for the New Maccabeats 2016 Chanukah Story.

If you had three minutes and fifty-five seconds (3:55) to tell the story of Chanukah, I would refer anyone to this video by the Maccabees.   One of the best!  Why?  It tells the Chanukah story and gets right to the point!  Lin-Manuel Miranda created the sensational Broadway show about America’s founding father.  A man not born with a silver spoon.
The Maccabeats creates parodies with the music from pop culture.  YouTube technology paved the way for them to create a visual Jewish Holiday to be enjoyable and can learn from it. They show their creativity in all their videos.   The Chanukah was not only about the oil that lasted eight full days.  It was always about Religious Freedom.  The Hamilton Lyrics celebrates American Freedom.
Watch the Maccabeats, Hamilton style, to the end.  It is powerful!  After you watch it once, you should rewatch and follow the lyrics that are below in the information portion of the YouTube video.