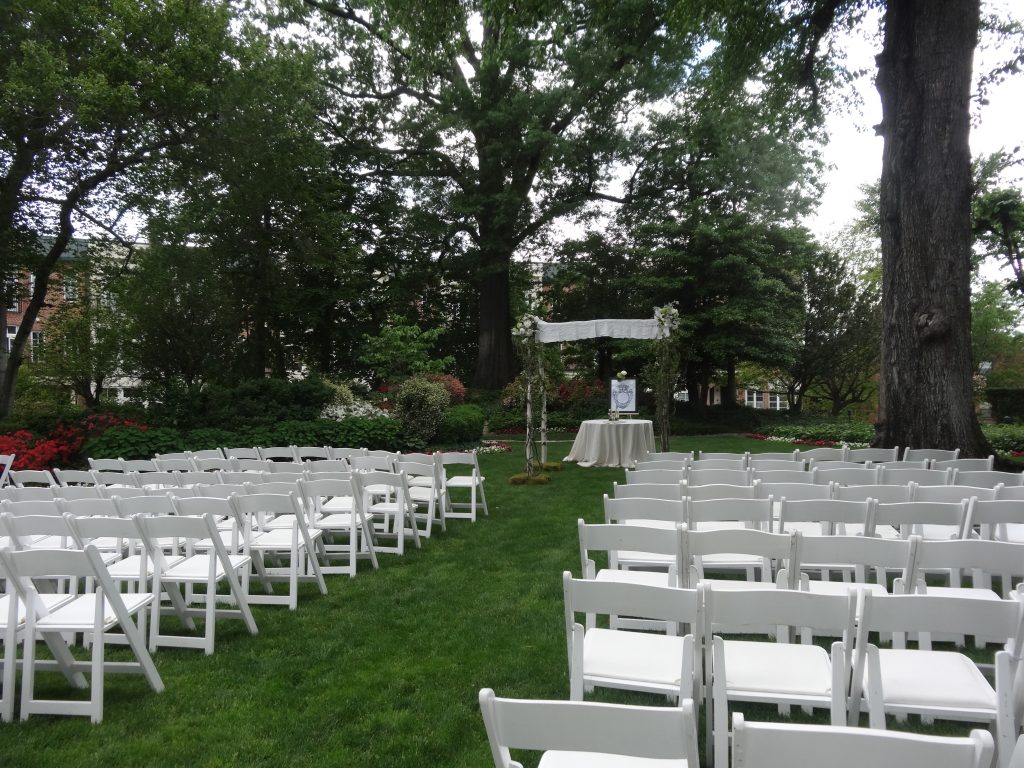 This Chuppah story is about a hopeful bride belonging to a reform temple and that someday her wedding ceremony would be in that temple’s sanctuary. That day arrived, it was all she thought it would be, but before that memorable day, the wedding planning hit a few bumps in the road. This one bump in the road is now a treasured story.  The bride allowed it to be shared for all the future brides to be inspired.

The bride; because of her deeply held beliefs and her very active involvement in the temple, she had always known that she wanted to have the traditional Chuppah used for her wedding, not a florist’s artistic expression. Though a florist’s creations, with the white tulle, ribbons, and flowers, can be quite beautiful, they did not have that feeling of a tradition for this bride. Besides, what does happen to all those flowers, tulle and ribbons when the ceremony is over?

The first stop she went to were the ladies in the office who know all there is to know in the temple. She was quite astounded that they did not seem to know just where the traditional temple Chuppah was. There had been some major construction on the main building and things had been moved around.

“Where are the poles and their bases?” she asked. “We do have them and they are in good condition.” The office secretary assured her. She also advised the bride-to-be to talk to the temple board member who was in charge of overseeing events such as a wedding at the temple. As she was going down the hall toward the lobby and to the exit, she just happened to meet the board member she needed to speak with.

“Pardon me, Sarah. I just spoke with Kathy in the office and she said I should speak with you. Do you know where the temple’s Chuppah is stored here? I want so much to use it for my wedding.”

“The Chuppah, Oh, I am sorry, but I think it was accidentally destroyed during a phase of the major construction of the building,” Sarah responded.

“Destroyed, will the board be able to replace it in time for my wedding?” asked the dismayed bride.

Sarah answered, “I don’t know right now, it would have to be discussed and it is not high on the priority list at the moment.”

The bride was stunned and asked, “Not a priority? But what about the couples who want to use it for their weddings, like us?”

“I am very sorry, but we just don’t have one for the time being. Why don’t you have one made by the florist? Everyone else does.” Sarah replied.

As she exited the building to the parking lot, the bride thought, “How could it be that a temple would not make it a priority to replace one of the most important symbolic ritual items a bride and groom needed for their Jewish wedding? Before she entered her car, she turned and looked at the building bewildered, and knew ‘like everyone else’ was not an option.”

After speaking with her groom-to-be, she knew she had to jump into action. The temple provided the bases that held the poles in place. These can be adjusted to fit any size canopy as they are free-standing.

The Options
(*) If the budget allows and there is sufficient time, many artists hand paint Chuppahs. There are websites on the internet that showcase their designs. Oversized tallits (prayer shawl) can be used as long as it is a lightweight fabric and the wedding couple with family can fit underneath it.

(*) A beautiful alternative for a Chuppah is a large, lightweight linen tablecloth. The material would need to be sewn with corner-like pockets in a manner that enables the tablecloth to be attached to the poles. The reason for the lightweight linen is to avoid too much sagging in the middle when erected for the ceremony.  It should only sag a little per tradition.

A Treasure was Discovered
The bride found just such a tablecloth. She kept her mother’s linen tablecloths, and after looking them over, there was one that stood out among the rest. However, it did have a few yellowing age type stains and a tiny slit. It had a nature-like design with branches and flowers that were elegant without being too busy and a border that was a lovely sky blue. The colors never faded as well. Was this her something blue from her mom? She saw it as a gift from her mother, who had passed on, and that made this tablecloth even more meaningful. The few yellowing stains did need to be removed and she had to soak it several times with a stain remover. And it worked! Now she not only had something blue, but she had a Chuppah with extra special meaning. It seemed to be a sign that her mother was right there with her doing what mothers do best – saving the day!